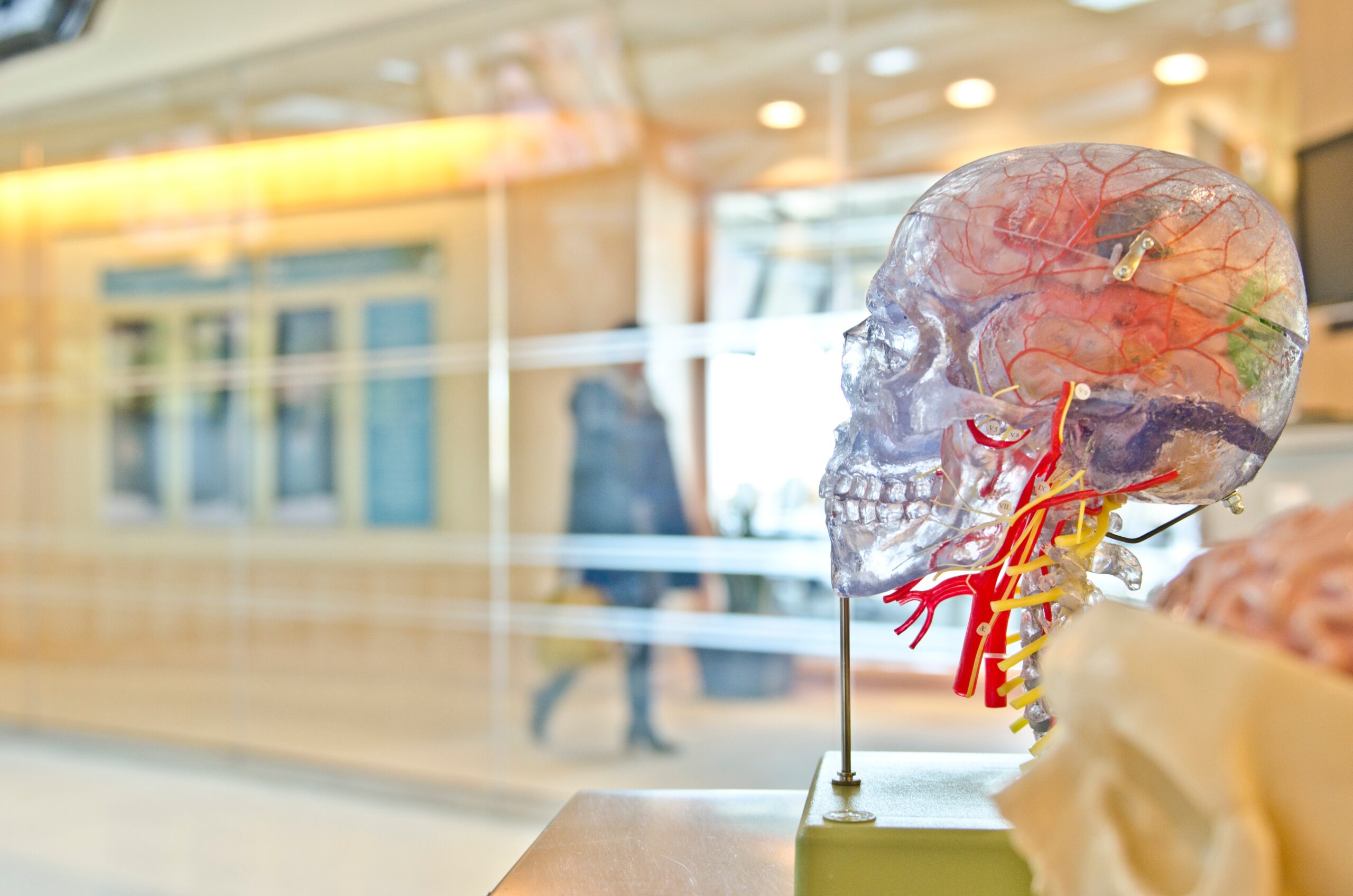 When we think of a brain, the first thing that comes to mind is a large pink and wrinkled mass, right? But why does the brain have wrinkles and what are those wrinkles or folds made of?

The folds of the brain are not there randomly and they even have names. The sunken formations are called grooves and the raised parts, gyrus, and they occur because the cerebral cortex bends.

In this post we are going to answer ‘’Why does the brain have gyri and sulci?’’ We will describe each gyri and sulci in the brain, how they are formed and why they are important.

Why does the brain have gyri and sulci?

The fissures of the brain are the grooves and folds present on the surface of the cerebral cortex. They are the part that gives the brain its wrinkled appearance, and its function is fundamental in the development of human intelligence and our higher mental capacities.

Brain fissures can be divided into gyrus and sulci, depending on their exact anatomy. Its main function is to increase the surface area of this organ, in such a way that a greater number of neurons accumulate in the cortex.

Thus, the information processing capacity increases without having to increase the size of the skull.

Virtually all vertebrate animals present fissures in the brain, but human fissures are the most complex of all. In this article we will see which are the most important, and we will study their main characteristics.

The cerebral cortex is a thin layer that covers the cerebral hemispheres and is involved in cognitive processes such as memory, language and the formation of consciousness. When an embryo is developing, the brain begins to grow with a smooth surface.

As the brain grows, the cerebral cortex begins to form gyrification — the formation of grooves and gyri.

It is interesting to mention that the most prominent gyri are conserved between individuals and even, sometimes, between species. This tells us that brain development is similar between different animals.

In the human species, the brain has increased in size rapidly during its evolution and is mainly due to the growth of the cortex. Because a large brain needs more space, one explanation for why wrinkles exist is that the folds allow the surface area of ​​the cerebral cortex to increase within a confined space such as the skull.

Each hemisphere, in its time, is divided into 4 lobes

These lobes are delimited by four cerebral fissures: central or Roland fissure, lateral or Silvio fissure, parieto-occipital fissure and cingulate fissure. The areas of cerebral cortex that remain between these fissures are what we know as lobes:

It is the largest lobe of the cerebral cortex. It is located in the front, just behind the forehead. It extends from the most anterior part to the Rolando fissure. It is the command and control center of the human brain: “the great conductor.”

It is closely related to executive functions, so it is involved in planning, reasoning and problem solving, judgment and impulse control, and also in the regulation of emotions, such as empathy and generosity, and conduct.

It is separated from the frontal and parietal lobes by the Silvio fissure and the limits of the occipital lobe. It is located on the right and left sides of the brain. It is involved in auditory and language processing. It is also involved in memory functions and emotion management.

It occupies the area between the rolling fissure and the upper part of the parieto-occipital fissure. It is in charge of the integration of sensory information. It contributes to the processing of pain and touch among other important functions.

It is delimited by the posterior ends of the parietal and temporal lobes. It deals mainly with vision. Analyze aspects such as shape, color and movement to interpret and draw conclusions from visual images.

Function of the convolutions and sulci

The convolutions and the cerebral sulci fulfill two very important functions, these folds help to increase the surface of the cerebral cortex. This allows more neurons to accumulate in the cortex and thus increases the brain’s ability to process information.

The gyri and sulci also form brain divisions creating boundaries between the lobes of the brain and dividing the brain into two hemispheres. In turn, the cerebral cortex is divided into four lobes. The frontal lobes are found in the frontmost region of the cerebral cortex.

Each of these brain lobes is responsible for several important functions. The frontal lobes are vital for motor control, thinking, and reasoning. The parietal lobes process sensory information, while the occipital lobes are the main centers for visual processing.

The temporal lobes are important for the production of language and speech, as well as for the processing of memory and emotion.

A number of important convolutions of the brain are listed below.

The gyrus, or fusiform gyrus, is situated between the lower temporal gyrus and the hippocampal gyrus on the basal surface of the cerebral hemisphere, primarily in the temporal lobe.

This fissure is part of the limbic system, essential for affective processing and plays a vital role in facial recognition; prosopagnosia, also called face blindness, can be caused by damage to this region of the brain

An arch-shaped fissure or fold of the brain, situated over the corpus callosum, is the cingulate gyrus. Its primary function is to encourage as a connection or bridge between the limbic system and the neocortex’s higher cognitive functions, which is why it plays a crucial role in connecting volitional, motor, memory, cognitive and affective aspects.

The gyrus or angular gyrus is a fissure located in the parietal lobe, more specifically between the intraparietal sulcus and the horizontal branch of the Silvio fissure.

The functions of the angular gyrus include the processing and interpretation of language, visual and auditory information. It has connections with the Wernicke area, in charge of the auditory decoding of linguistic information.

A number of important convolutions of the brain are listed below.

Often known as the longitudinal fissure, the sulcus or interhemispheric fissure is a groove situated in the cortex that separates the brain into two hemispheres, connected together by a series of nerve fibers called the callosum corpus. A fold of the dura mater and the anterior cerebral artery are included in this fissure.

The lateral sulcus or fissure of Silvio is one of the most noticeable in the brain since almost the entire surface of its cortex extends transversely. It is situated in the lower part of the brain hemispheres, the boundary between both the temporal lobe and the parietal lobe being delimited.

It is one of the deepest cavities as well and under it is another relevant brain structure: the insula.

A cleft found in the upper part of the brain is the central sulcus or Rolando fissure and distinguishes the frontal lobe from the temporal lobe, separating the motor cortex on one side and the main somatosensory cortex on the other hand.

This fissure, incorporating both will function as a link between motor and sensory information.

A fissure that originally comes in the interhemispheric fissure, located on the inner face of each cerebral hemisphere, is the parietooccipital sulcus or external perpendicular fissure. It distinguishes the parietal lobe from the occipital lobe, as its title suggests.

In front of the occipital pole of the brain, the lateral portion of the sulcus is situated and the medial part goes downwards and forwards. The calcarine fissure below and behind the corpus callosum’s posterior end connects it.

The sulcus or calcarine fissure is a groove that divides the visual cortex into 2 parts, situated in the occipital region of the inner or medial face of the cerebral hemispheres. Until it enters the parietooccipital sulcus, it takes a horizontal path.

The sulcus callosum, which plays related functions within the limbic system, is situated on the medial cerebral surface and divides the corpus callosum from the cingulate. As a separate structure, while the cingulum is typically delimited, it is part of the frontal and parietal lobes.

In May 2009, Scientific American published a paper by Catherine S. Pollard, a biostatistician at the University of California who developed a computer program to compare the segments of greatest difference between humans and chimpanzees.

The sequence that showed the greatest difference through this analysis has 118 nucleotides, which he called HAR1, the “human accelerated region”.

HAR1 appears to be active in the human brain and other vertebrates. Well, this region evolved very slowly in non-human vertebrates, since there are only two changes between the nucleotides of the sequences of chickens and chimpanzees while the number of differences with humans is 18.

The HAR1 sequence has been shown in cultured cells to be a modulator of gene expression and has been found to be active in a type of neuron involved in the development of the cerebral cortex.

In fact, when the cells where HAR1 is activated are damaged, the brain develops abnormally and the cerebral cortex does not have its characteristic appearance (with numerous furrows and lobes).

An anatomical characteristic about intelligence is not only the weight of the brain, but that it is wrinkled, that is, the number of furrows and lobes it has.

FAQS: Why does the brain have gyri and sulci?

Why does the brain have gyri and sulci quizlet?

The benefits of cerebral cortex with gyri and sulci are that it enables the maximum number of neurons (20 billion) to be folded for mental processes in the restricted region of the skull.

What does the gyri do in the brain?

It is an important integrating center for different areas of the brain, as well as for higher attention and learning functions.

Why do brains have folds?

Because a large brain needs more space, one explanation for why wrinkles exist is that the folds allow the surface area of the cerebral cortex to increase within a confined space such as the skull.

What is the difference between sulci and gyri?

A brain fold is known as a gyrus, while a depression is called a sulcus or fissure.

What is the functional advantage of having more gyri and sulci?

They raise the cerebral cortex’s surface area and form brain divisions. Growing the brain’s surface area allows more neurons to be crammed into the cortex so that more information can be processed.

In this post we are going to answer ‘’Why does the brain have gyri and sulci?’’ We described each gyri and sulci in the brain, how they are formed and why they are important.