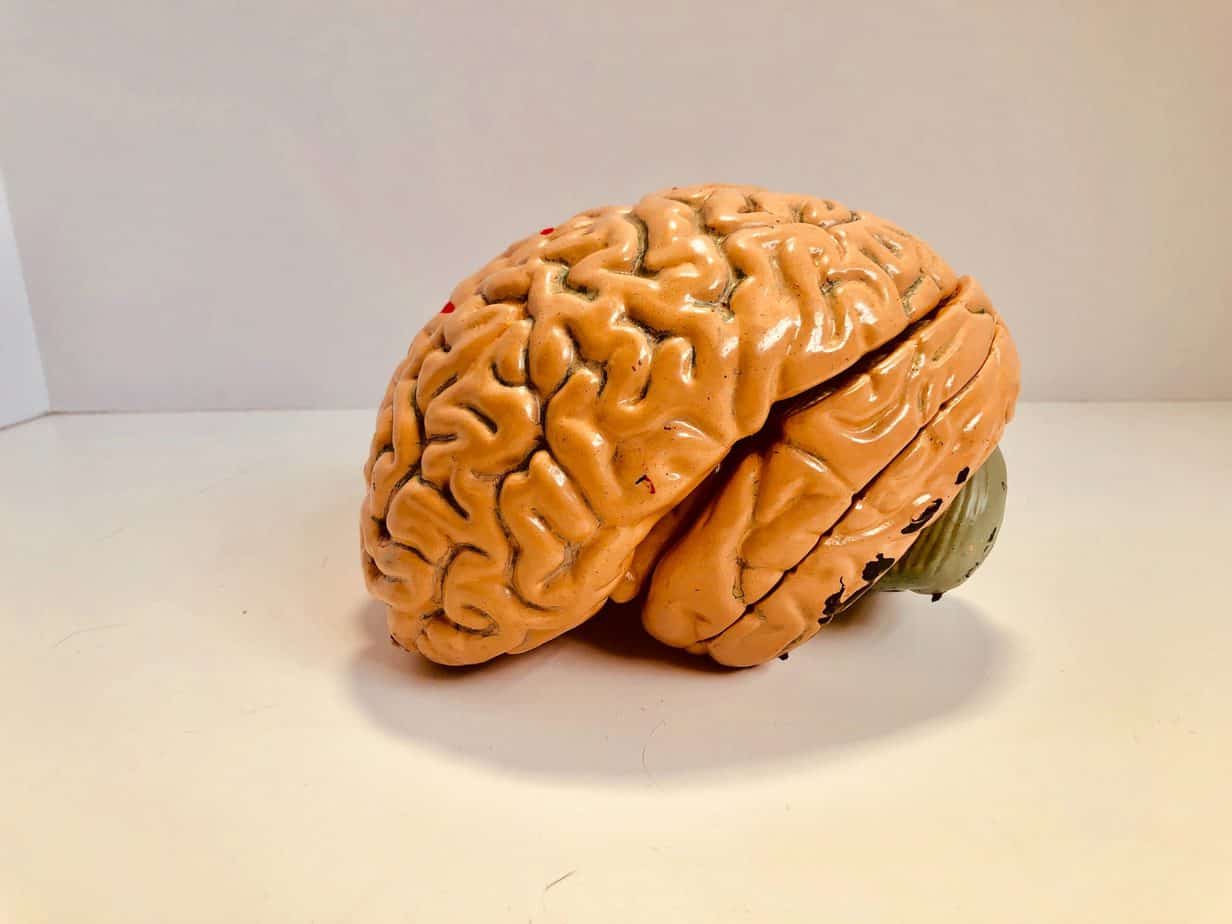 In this post we are going to answer the question ‘’Where is language stored in the brain?’’ We will discover the areas involved in the production of language and what are the consequences that injuries in these areas can bring.

Where is language stored in the brain?

The language is stored in the left hemisphere specifically in the Broca area and Wernicke area.

Human language is a flexible system of symbols that allows us to communicate our ideas, thoughts, and feelings. Unlike animal communication, human language is semantic or meaningful: we can exchange detailed information about all kinds of objects and events, feelings and ideas.

We can tell others not only “Watch out!” but also why. Human language is also characterized by displacement: it frees us from the here and now, so that we can communicate time and space to people who have never been in the place or had the experience we describe.

When facing a problem, we can consider alternative solutions, estimate their consequences, and weigh the costs and benefits of different actions in our head before doing anything. In short, language allows us to conduct thought experiments: If … then.

Finally, human language is productive: we can combine sounds to form new words, arrange words into phrases, and organize phrases into sentences; The possibilities are almost endless.

Language and the brain

Contrary to popular belief, the areas in charge of language are not the same in each and every one of us. The main distinction has to do with whether we are left-handed or right-handed.

For that 97% of the population that is right-handed, language areas are mostly distributed in the left hemisphere, unlike for left-handed people.

In addition, our brain is hyperspecialized and with language there is no exception. The areas closest to the back or occipital part of the skull, that is, Wernicke’s area, collect information from our senses for understanding. Instead, the most frontal part is in charge of executive control, in this case, Broca’s area controls the production of language.

But it is not only about the specialization of the brain, but about how those areas communicate with each other. In the case of language, this function is fulfilled by the Arched Fascicle that guides the information between the Broca and Wernicke areas.

For this reason, in Broca’s Aphasia the production of language is damaged, in Wernicke’s Aphasia understanding and in Conduction Aphasia the Arch Fasciculus.

Broca’s area is connected to Wernicke’s area by a bundle of nerve fibers called an arcuate fasciculus.

This region of the brain was first named in 1861 by the French neurosurgeon Paul Broca, who discovered the function of this area while examining the brains of patients with language difficulties. It was he who discovered that it plays a vital role in generating articulate speech.

Broca’s area is divided into two main subareas: the triangular area (located in the anterior part), which is responsible for the interpretation of various types of stimuli (multimodal association) and the generation of verbal responses.

And the opercular (located in the posterior zone, next to the motor cortex), which deals with only one type of stimulus (unimodal association) and with coordinating the organs of the phonatory apparatus for the production of speech.

The functions performed by Broca’s area are the following

These functions are the pillars that support adequate language production that allows communication. Therefore, injuries to Broca’s area can have significant negative consequences when it comes to using language and communicating. In the next section we will talk about the specific consequences of injuries in that area.

Broca’s aphasia is a language production disorder caused by lesions in Broca’s area. This disorder is characterized by slow, strained, and not fluent speech.

But although pronunciation is often poor, the message they convey often has meaning. So we conclude that the semantics is not damaged in this type of disorder.

It is easier for people with Broca’s aphasia to say some types of words than others. For example, function words (a, the, some, about, of…) are more difficult to pronounce than content words.

This is mainly due to the fact that the former are words for only grammatical use and that managing grammar is the responsibility of Broca’s area. Instead, since the semantics are intact, the content words are easier to produce.

Language comprehension is the human being’s ability to process and understand spoken and written language. This ability has helped us greatly throughout our evolutionary history. The ability to communicate effectively has enabled us to collaborate and create complex partnerships to cope with a hostile world.

For this reason, we find biologically ingrained structures in the brain, such as Wernicke’s area.

A key aspect of the neural disposition of language is that it is lateralized. In other words, the vast majority of structures related to language are found in the left hemisphere.

It is true that there are studies that affirm that processes such as jokes, pragmatics and sarcasm are managed in the right hemisphere. Thus, Wernicke’s area, responsible for understanding language, is in the left hemisphere. More specifically in zones 21 and 22, according to the Brodmann areas.

Anatomy and functionality of Wernicke’s area

Apart from Brodmann’s zones 21 and 22, which are the nerve center of Wernicke’s area, there are other structures involved in understanding language. When we speak of the extended Wernicke area we also include zones 20, 37, 38, 39 and 40. Which participate in the association of words with other types of information.

Wernicke’s area is closely linked to the primary auditory cortex, something that is consistent with its role in understanding spoken language. At an anatomical level, it is also remarkable to talk about the great connections that said system has with the drill area.

This area is primarily responsible for understanding language. These two areas (Wernicke and Broca) are connected by a series of neuronal bundles, which in turn form the so-called arcuate fasciculus.

These functions are the pillars that support an adequate understanding of language that allows communication. Therefore, injuries to Wernicke’s area can have significant negative consequences when it comes to using language and coping with communication. In the next section we will talk about the specific consequences of injuries in that area.

Wernicke’s aphasia is a language production disorder caused by lesions in Wernicke’s area. This disorder is characterized by unstructured and meaningless speech, together with an almost non-existent understanding of language.

But even though the message is meaningless, the speech is delivered smoothly and effortlessly. This is because the production of the language is intact.

In contrast to Broca’s aphasia, the patient uses a large number of functional words (el, de, ante, un …), using complex tenses and subordinate sentences. Instead, he uses few words with content, and these words do not link together to form meaning.

This is mainly due to an effect called semantic paralexia, a phenomenon whereby instead of saying the word they are looking for, they say a different one with a similar meaning. This occurs because Wernicke’s area is not precise in selecting words through meaning.

A key aspect of Wernicke’s aphasia is that the fluency of language is completely intact. Subjects with this disorder have no problem maintaining speech without effort. Of course, devoid of meaning. It is because the brain structure responsible for producing speech is Broca’s area.

This helps us to understand that Wernicke’s area is specialized in the understanding and semantics of language. Despite its connections with other areas, these are able to continue its operation independently.

Speech doesn’t just depend on the brain

But not only is proper brain function necessary for adequate language production, it is also necessary for other structures of the Central Nervous System to function properly. If not, we may encounter the following problems:

So, where is language stored in the brain?

Language is a functional system in which cortical and subcortical structures participate. The lateralization of language depends on a series of variables such as manual dominance, age, sex and education.

The main areas of the brain related to language are found in the left hemisphere in the perisylvian region. These are the areas of Broca, Wernicke, supramarginal and angular gyri; anterior insula, pole, and second and third gyri of both temporal lobes.

Each of these areas are points of convergence, which are related to multiple regions of the brain, forming an extensive neural network.

In this post we answered the question ‘’Where is language stored in the brain?’’ We have discovered the areas involved in the production of language and what are the consequences that injuries in these areas can bring.