In this article we are going to answer the question ‘’What happens if the prefrontal cortex is damaged?’’ We will explain what the frontal cortex is, how it is constituted and the symptoms of injuries in this brain area.

What happens if the prefrontal cortex is damaged?

If the prefrontal cortez is damaged develop problems with making decisions and with behaving appropriately in social situations.

The human brain is made up of many structures, one of the most visible and the one that takes the longest to develop, the cortex, the superficial part full of folds that we have all ever seen drawn or in photography.

This cortex is an essential part and of great importance for the human being, since it allows the integration and processing of the different information and enables the existence of complex skills such as abstract thinking, self-awareness and planning.

The cerebral cortex can be divided into two clearly delimitable hemispheres on the right and left, as well as several different brain lobes.

In our species, the largest of them and the one that in turn generates more research is the frontal lobe, of which one of the most relevant parts is the prefrontal cortex, which actively participates in allowing the adaptive behavior of the individual and even the establishment of concrete characteristics of the personality.

The prefrontal cortex is the most sophisticated reflection of our evolution. Evolutionarily speaking, it was the last cortical region to develop, to show complete phylogenetic and ontogenetic advancement.

We can easily identify it because it is that rough and wrinkled area, located in the area closest to our face, where the most complex mental and cognitive processes are contained.

One of the purposes of neuropsychology is to understand this sophisticated relationship between the brain and our behavior.

Thus, no one will be surprised to know that the prefrontal cortex is, without a doubt, one of the most interesting areas as well as determining factors for understanding our abstract thinking and even our self-awareness. It is, so to speak, that structure that makes us truly human.

Scientists call all of these sophisticated tasks that the prefrontal cortex performs “executive functions.” They decided this way because of a very specific fact: we are in front of that privileged space in our brain where one can distinguish good from evil, where we can value our environment and even establish control over our own thinking. 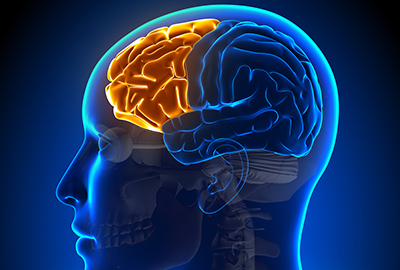 The prefrontal cortex: location in the brain

As we have seen, the prefrontal cortex is a part of the cerebral cortex belonging to the frontal lobe. It is located in the part of the brain closest to the face.

It is considered a multimodal or tertiary association area, since it coordinates the information from other brain areas. It is a large brain area with great importance in explaining behavioral control, personality and even cognitive abilities.

This part of the neocortex is the region of the brain that takes the longest to develop, since in fact it is considered that it does not finish its development until early adulthood between the ages of twenty and twenty-five.

Cognitive processes and executive functions could not be carried out without their participation so that we are facing one of the most relevant areas when it comes to adapting our behavior to situations and performing complex cognitive operations.

The prefrontal cortex has important connections with a large number of both cortical and subcortical brain regions, such as the limbic system, the basal ganglia, the hippocampus, the thalamus and the rest of the brain lobes.

That is why it influences and is influenced by a large amount of information from very different regions, being essential for the correct management of behavior and of our resources.

The prefrontal cortex is an area of ​​great importance for our survival in the environment in which we live and our coexistence in society. There are multiple functions of this brain region, which integrates and coordinates a large number of processes.

Some of them are those detailed below.

The prefrontal cortex is especially known for being the region of the brain most linked to executive functions. These are defined as the set of fundamentally cognitive abilities and aptitudes that allow adaptation to the environment and problem solving from the integration of various information and the anticipation and performance of behaviors based on them.

Within these functions we find the ability to anticipate, set goals and initiate and maintain an action, decision-making and inhibition of behavior, planning based on memory, the ability to modify our strategies or behavior. to elaborate abstract concepts and ideas.

The fixation of attention or working memory is also mediated by the prefrontal cortex, as is the cognitive capacity and adaptation to the environment. This does not mean that it is the only area dedicated to these purposes, but it does have very high participation.

Another of the main functions of the prefrontal is the control of social behavior.

Based on our interactions and the learning obtained both from them and from the rest of the information we capture, we are able to regulate our expressions and behaviors, feel empathy, restrict behavior based on possible consequences and consider other points of view outside our own.

Linking emotion and cognition so that we establish a plan to carry out certain actions is also due to the proper functioning of the prefrontal cortex. Thus, we are able to motivate ourselves and direct our behavior to the achievement of a goal that seduces us.

Although it is the limbic system that is most closely linked to the field of emotions, the prefrontal region of the brain is of great importance both when perceiving and expressing emotions, translating them into physiological reactions or allowing their conscious control.

Different aspects of personality are largely mediated by the functioning of the prefrontal cortex. The establishment of more or less stable patterns of behavior in the various aspects of life, and typical characteristics such as inhibition or shyness, or responsibility are some of the elements mediated by this brain region.

Injury to this brain area

The presence of lesions in the prefrontal area can cause serious alterations in the psyche and abilities of people.

Specifically, it can generate the loss of emotional expression (especially at the facial level), a deficit in impulse control, disinhibition, personality changes, antisocial behavior, hypersexuality and hyperorality, serious failures in planning, judgment and postponement of rewards. Also, flattened thinking slowed down and with little creative capacity.

These aspects can be seen in a large number of cases, such as injuries caused by head injuries or dementias such as frontotemporal or Huntington’s chorea.

The so-called dysexecutive syndrome, previously known as frontal syndrome, is a set of alterations of various types and severity that occur as a consequence of the existence of lesions in the frontal lobe and especially in the prefrontal area.

As can be reflected by its current name, the main affectation occurs in the executive functions, which can secondarily cause alterations in other aspects such as communication or personality.

Symptoms can be highly variable. Regarding the main higher functions, there is usually a decrease in the ability to inhibit impulses, perseverance due to the inability to change behavior and difficulties in general to adapt to variations in the environment.

They become inflexible and tend to have difficulty planning, concentrating, organizing and reorganizing information and keeping things in memory. It is not uncommon for them to have obsessive and/or paranoid thoughts.

The dysexecutive syndrome can be subdivided into three syndromes depending on the prefrontal region that has been injured and the type of symptoms that this injury causes.

This syndrome is caused by lesions in the dorsolateral prefrontal cortex. It is characterized by the presence of alterations in executive functions (it is the one that is most identified with the word dysexecutive) such as memory problems, reasoning difficulties, decision making, planning and analysis, perseverance and lack of concentration.

There are also problems with verbal fluency and even movement. Finally, at the behavioral level, they tend to present distractibility, lack of motivation, apathy and depressive syndromes.

This subtype of dysexecutive syndrome is caused by lesions in the orbitofrontal bone. The most obvious symptoms have to do with impulse control, personality change and difficulties in managing social behavior.

They are usually labile, aggressive and irritable, although they can also present dependence and ecosymptoms. They tend to explore the environment in a tactile way. Moria may appear, or empty happy mood and without internal or external stimulation to explain it. Obsessive-compulsive symptoms are not uncommon.

The most common symptoms of this lesion in the mesial circuit are apathy, lack of motivation and akinetic mutism, in which it does not respond to environmental stimulation despite being able to do so if it wants to.

Dysexecutive or frontal syndrome is a problem that can present different treatments depending on the type of phenomenon that causes it. It does not present a curative treatment, but the different symptoms can be worked on from a multidisciplinary perspective.

Generally, treatment is about recovering as far as possible the lost skills, alleviating the deficits generated by the injuries, enhancing the preserved skills and looking for alternative ways that allow compensating the possible deficits that they present.

Stimulation is very important, which usually requires occupational therapy to allow mental exercise and recovery of functions. However, hyperstimulation could backfire.

On the other hand, at a pharmacological level, different medications can be used to help overcome problems such as anxiety, possible paranoia and obsession, apathy or depression.

FAQS: What happens if the prefrontal cortex is damaged?

What happens if the frontal cortex is damaged?

If the injury affects the anterior part of the frontal lobe, the following may occur: Difficulty temporarily keeping information available for processing, reduced fluency of speech, and apathy.

How does the prefrontal cortex affect behavior?

Why is it important for the prefrontal cortex to develop properly?

This cortex is an essential part and of great importance for the human being, since it allows the integration and processing of the different information and enables the existence of complex skills such as abstract thinking, self-awareness and planning.

What kind of motor symptoms can damage to the prefrontal cortex lead to?

What are the signs of frontal lobe damage?

In this article we answered the question ‘’What happens if the prefrontal cortex is damaged?’’ We explained what the frontal cortex is, how it is constituted and the symptoms of injuries in this brain area.