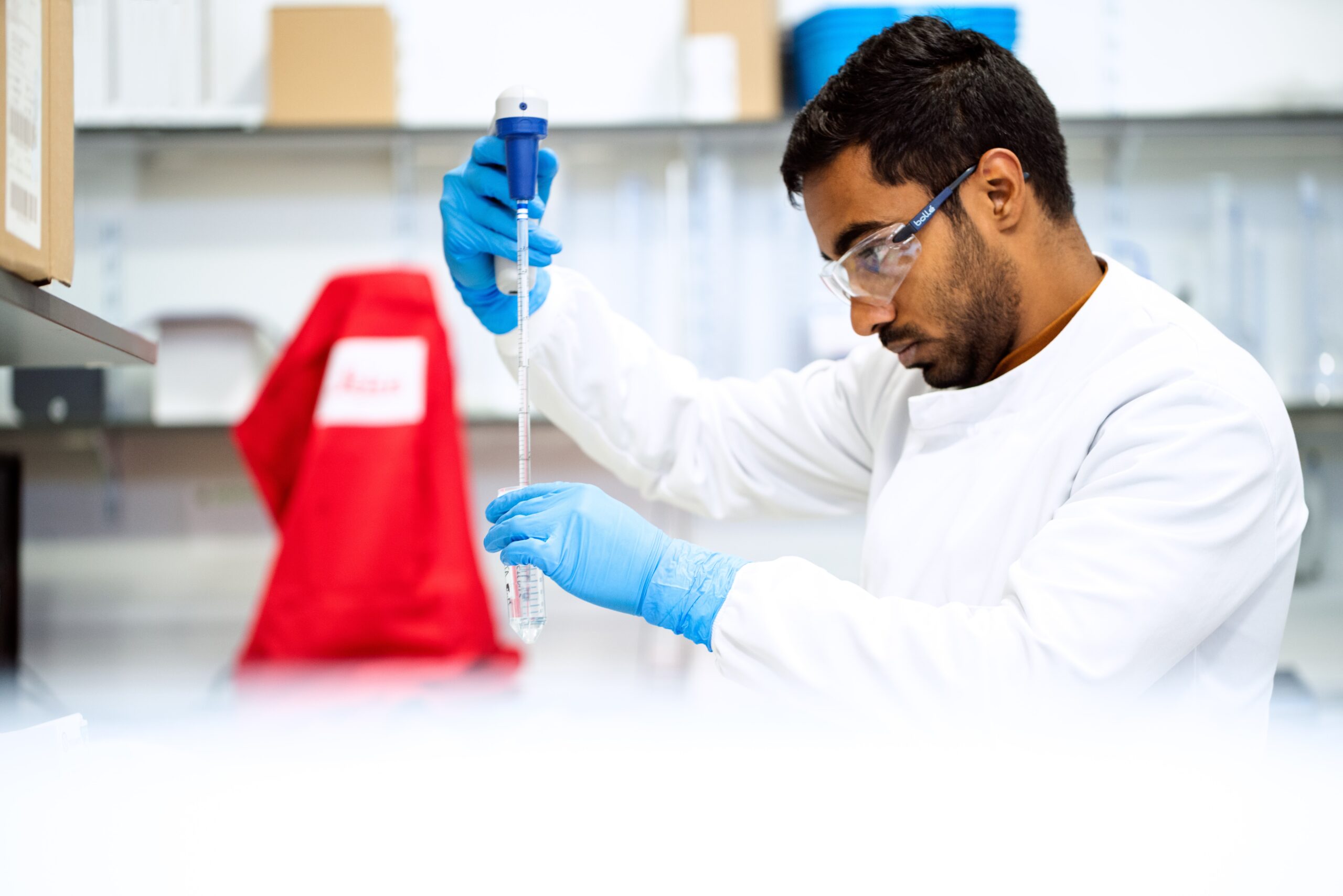 Computational neuroscience seeks to virtually recreate neural networks and their interactions in our brain.

These models will allow us to understand how electrochemical communication between individual neurons translates into functions that allow us to perceive, process, and react to stimuli. As well as solving problems and facing complex situations.

What does a computational neuroscientist do?

The human brain, the main apparatus of the central nervous system, is considered the most complex system existing in nature, so understanding its behavior has been a great challenge for the biological and physical sciences.

The human brain, the main apparatus of the central nervous system, is considered the most complex system existing in nature, so understanding its behavior has been a great challenge for the biological and physical sciences.

Neuroscience is defined as the study of the nervous system and each of its various aspects and specialized functions. In the 1940s, great scientists such as Wiener, Von Neumann and Shannon felt the need to understand the human brain in terms of fundamental principles of engineering and computation, which is why the idea of developing a branch capable of answering their questions arose.

Later, Alan Turing wanted to understand how the brain performed complex operations and ended up making the first computer. From here, computers have evolved a lot. For example, since the 1970s an exponential growth has been observed in several of its characteristics: the number of integrated transistors per micro-processor, the computing speed and the lower cost per transistor.

What is computer neuroscience?

Computational neuroscience (CN) is responsible for the study of the properties of neural connections and the digital recreation of these properties. Discipline is the point of conjunction between neuroscience and computer science.

The models and simulations are obtained from the information gathered in neuroimaging or psychophysiology experiments with human beings.

Simulations generated from said information are used to forecast which may be the possible networks involved in one or another function. Subsequently, such models and predictions are compared with the performance of real people subjected to experimental designs in the laboratory.

The experimental designs are carefully controlled to recreate, as faithfully as possible, the conditions that served as parameters for the simulations. This branch of neuroscience also allows us to establish a simile between the way of learning of biological organisms and the computerized forms of learning or machine learning.

Some time ago and with the study of human perception, we have realized the different information-processing mechanisms that we have.

These mechanisms allow us, for example, to take information in the form of light reflections and convert it into images, or the vibrations produced by a body in the air convert them into sound. The processing of information resulting from perceptual processes in our brain is the most efficient and powerful that we know of.

Computational neuroscience, in one of its various branches, studies precisely how to provide machines with this high level of environmental processing. At the same time, it seeks maximum efficiency in the processing of the information obtained from it, and thus the resolution of complex problems.

Based on the brain model, computer infrastructures have been generated that allow a structural emulation of the functioning of a neural network. This allows the computer program to process information much more efficiently. Thus optimizing the functions that these programs are capable of, as well as their learning algorithms.

A model is an interpretation or representation of reality, sometimes simplified. These are used to identify the different problems that can occur in a process and then simulate them and predict a solution.

Computational models arise from the need to understand in greater depth the most complex systems in nature. They carry out explicit processes, incorporating data and aspects that could simulate or even replicate a natural process of the real system, using a series of mathematical equations.

The first model to give way to the investigation of action potentials was the Hodgkin-Huxley model.

This model was developed in the early 1950s by Alan Hodgkin and Andrew Huxley. The scientists behind this model proposed it to explain the action potentials in the giant axon of a squid using currents of sodium and potassium and another current of chlorine ions.

The model shows how action potentials are transmitted in neurons using mathematical formulas and a set of differential equations that approximate the characteristics of neurons, which would make it possible to map each one individually.

Currently, this model is of utmost importance in Alzheimer’s disease research, as well as in treating profoundly deaf patients to understand speech.

Neurogenesis is a biological process through which new neurons are generated. For scientists, adult neurogenesis is still a mystery. Different investigations have been carried out in relation to this in which different models have been created. Among them is the Chamber-Miranker model series.

This experiment was able to show that selecting neurons from the middle level based on their connection can improve performance in learning a new alphabet. Furthermore, it will be discovered that by gradually changing new neurons, it turns out to be better for network training than replacing all neurons simultaneously.

This model has been used to research the area of short and long-term memory in the human brain, and how new neurons should positively impact learning mechanisms. In addition, work has been done to study different forms of mental illnesses, such as depression, post-traumatic stress, personality disorders and schizophrenia

The simulation models of brain activity are allowing us to estimate the effects that will derive from the problems in the connections between certain networks. Based on what we know about the relationship between connectivity in certain neural networks and different neurological, psychiatric or psychological conditions.

Computer models give us the possibility to study new interactions between neural networks and these diseases. Resulting in the establishment of new diagnostic criteria and patterns

With these simulations of brain activity, an early diagnosis of diseases such as schizophrenia is being attempted. At the same time, they are allowing us to learn more about the pathophysiology of such diseases, until now unclear.

In the same way, they help us in the early diagnosis of diseases, and even in the investigation of the possible action of different drugs in the brain. Likewise, they allow us to estimate the possible benefits of treatments such as transcranial magnetic stimulation from simulations.

Many of these neural maps have helped in the creation of various devices with successful interfaces. Some of these interfaces have been:

1. Cochlear implants for the recovery of hearing in deaf patients

3. Devices for neuronal stimulation for individuals suffering from motor diseases, such as, for example, Parkinson’s disease.

In the last decades, with the use of various computational models, much has been learned about neurons and small areas of neural networks in the human brain, such as their appearance and behavior.

These areas are where computational neuroscience focuses its studies as interpreting larger areas of the brain, with more complex neural systems, makes it more difficult to prepare models that simulate the functioning of these areas.

However, with the great need to develop neural maps to help in the treatment of diseases, then there are models capable of interpreting and processing neural data, and new techniques for preparing brain maps that would help to better understand the activity of certain unknown areas of the brain.

Computational neuroscience uses mathematical modelling, theoretical analysis, and abstractions of the brain to understand the principles that govern the development, structure, physiology, and cognitive abilities of the nervous system.

Due to the great complexity of this area of knowledge, computational neuroscience links with various fields of biophysics, neuroscience, cognitive science, electrical engineering, computer science, and mathematics.

The core of the research is focused on the cognitive, anatomical, and genetic bases of Alzheimer’s disease and previous stages of cognitive decline, with an eye toward developing biomarkers for early diagnosis and treatment.

As a computational neuroscientist, you will:

To meet these high expectations, together with other scientists and clinicians, you will develop a new framework of increasingly sophisticated whole-brain models that have allowed us to obtain a better and much more detailed mechanistic understanding of how the human brain works.

With the development of computer models that allow us to make simulations of brain activity, we will be closer and closer to being able to study the brain without the need to get up from the computer.

Certainly, the possibility of generating simulations in cases of progressive deterioration, as in Alzheimer’s disease, and thus helping an early diagnosis, is getting closer and closer.

On the other hand, another door that this branch of research opens for us is being able to study the effect of certain drugs or treatment techniques without the need for clinical trials.

Likewise, the possibility of recreating the speed and precision of brain processing in a computer and generating, from it, increasingly powerful artificial intelligence, proposes a certainly promising future.

Without a doubt, if you want to dedicate yourself to computational neuroscience, you must have a strong knowledge of mathematics and a great interest in the human brain. Some of your research may be one of the great discoveries in neuroscience.

FAQS: What does a computational neuroscientist do?

Yes, computational neuroscience is hard, it’s like combining neurology, with math and psychology. You must have strong mathematical foundations.

How do I become a computational neuroscientist?

To become a computational neuroscientist you will need:

How much school do you need to be a neuroscientist?

A lot. To become a computational neuroscientist, you will need a Ph.D. It may take you 10 years minimum.

Do neuroscientists make a lot of money?

It depends on the field of expertise and the area where you work. For example, computational neuroscientists can earn up to $ 114,000 annually. While cognitive neuroscientists make $ 64,000, almost half.