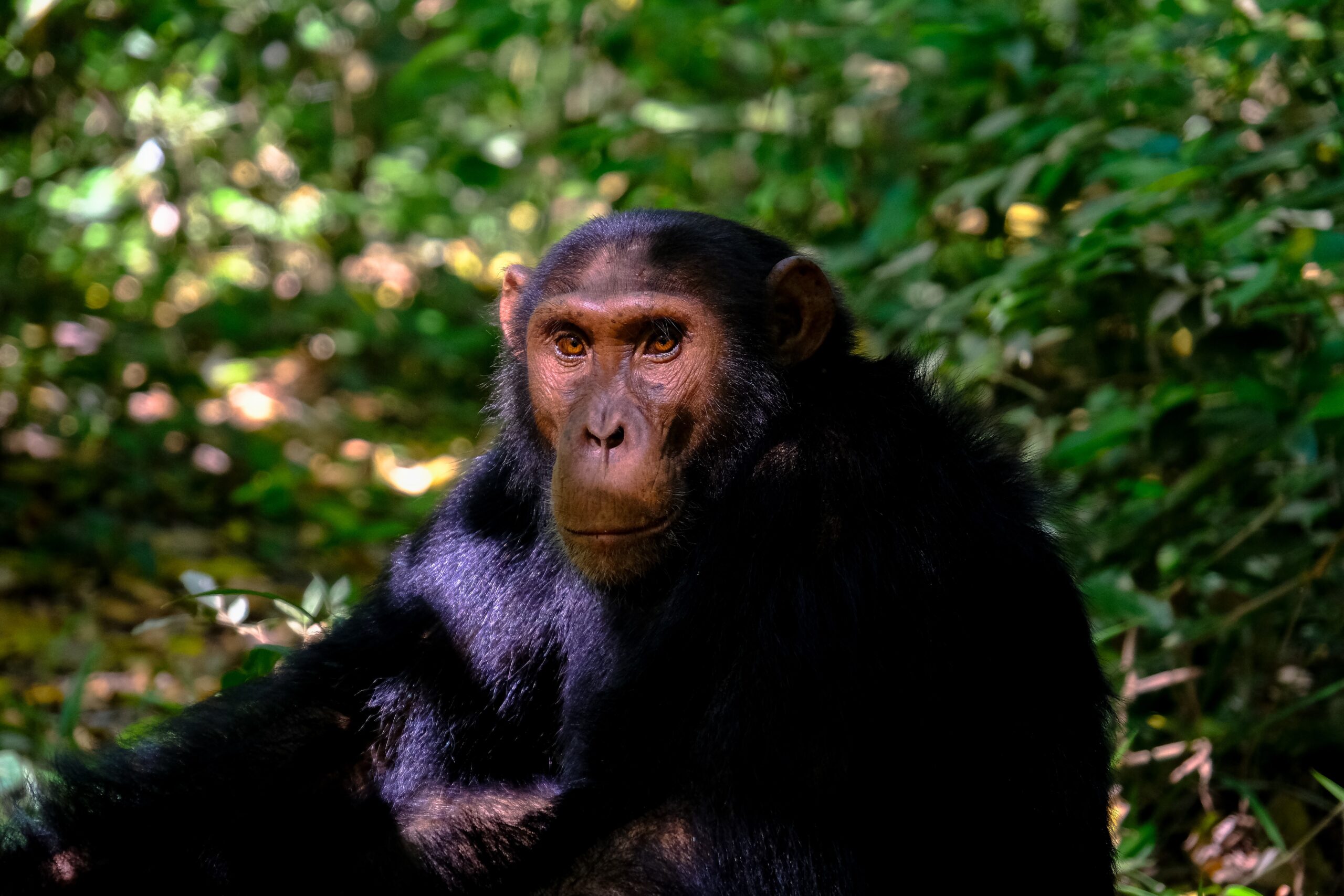 They say chimpanzees are our closest relatives, yet humans cannot constantly swing in trees. What is this about?

In this article we are going to answer the question ‘’How strong is a chimpanzee?’’ We will discover what allows chimpanzees, smaller than us, to have such great strength.

How strong is a chimpanzee?

Chimpanzees are incredibly strong and fast. This is due to its muscle fibers. They can lift 1.5 times more weight than a human. the maximum they can lift is 1,250 pounds

In the futuristic film Planet of the Apes, chimpanzees lead the revolution that would triumph over man thanks to two keys: the intelligence they acquire and strength superior to humans.

That monkeys may one day be more intelligent than humans is not believed by anyone (except science fiction authors and film producers), but that they have a much greater strength than humans, no one disputes. The million dollar question was how much stronger is a chimpanzee than a human being.

The first scientific tests date back to 1920, and those studies claimed that apes could be six times stronger than a person. With the passing of the years and thanks to new research, the potency of these animals decreased.

But a new study points out that chimpanzees are “only” 1.35 times stronger than humans, a “modest” difference, according to a study led by Matthew O’Neill of the University of Arizona.

There are two species of chimpanzees in the world; the common chimpanzee and the bonobo. They all belong to the same category as humans, monkeys and gorillas.

In 1973 it was successfully determined that chimpanzees are 99% comparable to human DNA, the main characteristic of the chimpanzee that makes it so interesting to us. Today we have a more in-depth DNA test and it shows that the percentage is 94%.

Another characteristic of the chimpanzee is that the average size of a full-grown male chimpanzee is 150 pounds and 5-6 feet tall. The females are slightly smaller so that there’s a differentiation between the sexes in their environment.

Chimpanzees walk on their knuckles and are able to move very quickly in this position. They are also capable of walking in an upright position, but at a slower speed than when moving on the knuckles, another interesting feature.

In 1923, a zoologist named John Bauman tested whether primates have extraordinary strength. It was a notion accepted by many experts, but no one had bothered to put it to the test.

After a lot of pushing, he got the unwitting chimps to participate in his experiment, and he found an ancient circus ape named Suzette who was capable of pulling 1,260 pounds of weight. Another chimpanzee, Boma, was able to pull 847 pounds with one hand, far from the human’s strength.

Bauman’s work reinforced the conception of the immense strength of our closest living relatives and the idea has lived on to this day. For example, the Jane Goodall Institute in the UK maintains that an adult chimpanzee is six to seven times stronger than a person.

Now, a new study has re-analyzed Bauman’s two inaugural experiments, published in 1923 and 1926, and four other papers that appeared between 1944 and 2014. Their conclusion is that chimpanzees lift more weight and jump more than people, but only 1.5 times more.

“Bauman’s most striking results have never been replicated, so if any expert mentions that chimpanzees have unusual strength, they have not critically analyzed the data” explains Matthew O’Neill, a researcher at the University of Arizona and co-author of the study.

Bauman’s chimps were an average of 2.6 times stronger than humans, he explains. In 1944 a similar analysis showed that primates were 1.2 times stronger. In 2006, a comparison found that bonobos jump more than humans, including elite athletes, with a difference between them of 1.6.

Finally, in 2014, a design study similar to Bauman’s pointed out that the divergence was twice in favor of chimpanzees. None of the subsequent studies found anywhere near as strong a chimpanzee as the one at the New York Zoo.

In the absence of more data -Bauman once tried to study orangutans, but they were not motivated to lift weights, and there are no studies with gorillas- the Arizona team has turned to analysis of muscle samples from both species and created computer models that simulate the movement of entire muscles.

The results, published in the journal Proceedings of the US National Academy of Sciences, suggest that the dynamic strength of the skeletal muscle of a chimpanzee is 1.3 times greater than that of a human, which is close to 1.5 derived from previous studies.

“There are no differences between the maximum force or the speed of contraction of individual muscle fibers between humans and chimpanzees,” explains O’Neill. The real cause of the slight superiority of the monkeys is in the type of muscle fibers and their length.

Chimpanzees have a higher proportion of fast-twitch fibers and these are longer, which gives them the observed differential. This muscular composition is common among primates and most mammals. Meanwhile, the only other animal analyzed with a composition similar to ours, with more slow and short fibers, is the lazy loris.

The authors of the new study believe that about seven million years ago, the common chimpanzee-human relative would have a similar muscle composition to that of chimpanzees, giving it the strength it needs to climb trees.

Slow-twitch fibers are ideal for repetitive exercises, such as walking on two legs, so they could well be the engine of this process.

The key is in the fibers of the muscles

Their research, published in the Proceedings of the National Academy of Sciences, focused on analyzing a group of chimpanzee muscle fibers that had been frozen after death. More specifically, he studied the composition of skeletal muscle, which is attached to bones by a conglomerate of collagen known as tendons.

At this point, O’Neill’s team concluded that there were no major differences between the contraction properties of chimpanzee muscle fibers compared to humans.

Using 3D computer models, they discovered that the key was in the length of the fibers and their distribution rather than the cellular composition of the muscles.

In apes, the fibers are longer and have twice as many ‘fast-twitch fibers’, which means that a chimpanzee can lift heavy objects with greater speed or they can support their full body weight on one of their arms while hanging off a branch.

But this greater force that unfolds at a faster speed has a counterpart: the chimpanzee gets tired soon.

By contrast, humans are one of the few animal species that have slow-twitch muscle fibers. This implies that his strength is lower, but he gains in resistance.

Some walk, others hang

According to research, when the primitive hominids began to evolve, which were common relatives of man and the chimpanzee, the branch that led to the future human was modifying his muscles to favor resistance, and that allowed him to increase his posture, and to be able to walk upright for long distances, so many that later he left Africa and conquered the world thanks to the strength of his two legs.

On the other hand, in the line that would lead chimpanzees and other great apes, muscle fibers would be reinforced that would allow them to have greater rapid force in their legs and arms, and with which they can perform brachiation, which is the method of mobilizing branch by branch using its upper limbs.

So, how strong is a chimpanzee?

“Over the last 100 years, there have been numerous testimonies that put the spotlight on the enormous power of chimpanzee muscles compared to humans. However, that conjecture was far from proven.’’ said Brian Umberger, a researcher at the University of Massachusetts Amherst.

Umberger added ‘’If this difference actually were present, it would be a great surprise to biologists, given what we know about the characteristics of the muscles of analogously sized animals, such as chimpanzees and humans’’.

Evolutionists and naturalists used to link these alleged differences with the fact that homo sapiens had already got used to civilized life. The consequence was logical: as humans began to use artifacts, the enormous physical force was no longer necessary.

On the other hand, experiments measuring the physical strength of chimpanzees, which were carried out in zoos and animal shelters, showed diametrically opposite results: primates turned out to be, on average, only 1.5 times stronger if established as an equivalent one kilogram of body weight.

Umberger concluded that evolution made humans more resilient, while ‘instantaneous force’ prevailed in chimpanzees. However, all this is due to living conditions and there is nothing supernatural about these characteristics.

And you, would you face a chimpanzee?

FAQS: How strong is a chimpanzee?

How much can a chimp bench?

Can a human beat a chimp?

No, chimps are extremely powerful. With a blow from a chimpanzee the human is already dead.

Is a gorilla stronger than a chimpanzee?

Yes, gorillas are more powerful thanks to their large build. However, chimpanzees are faster.

How are chimps so strong?

Given their low number of motor neurons, each neuron activates more muscle fibers than they really need, which is why they maximize their strength.

Can a chimpanzee kill you?

Undoubtedly. If a chimpanzee feels in danger, an attack can be fatal.

In this article we answered the question ‘’How strong is a chimpanzee?’’ We discovered what allows chimpanzees, smaller than us, to have such great strength.

If you have any comments or questions please let us know!