The consumption of marijuana is a widespread practice today, being one of the most consumed drugs.

Although socially it has been seen as a soft drug comparable to alcohol and with relatively little risk in its use (in fact it has interesting properties that make it very useful at the medicinal level in different diseases and disorders), the frequent use of this drug can have relevant long-term negative effects, especially in relation to the brain and its structure.

Of course, that does not mean that it is a very dangerous drug comparable, for example, to heroin. However, the defense that has been made about the supposedly innocuous nature of its consumption is difficult to defend today, as we will see answering the question ”Does weed permanently damage your brain?’’

Does weed permanently damage your brain?

Yes, weed causes permanent changes in the brain, and its effects can affect the lifestyle of users.

Marijuana is one of the many ways in which cannabis is consumed, specifically the one that uses chopped and shredded leaves and stems of the plant.

This substance has psychoactive properties that have been known since ancient times, having been used medicinally and recreationally since then by different peoples.

Today its consumption is widely spread worldwide, especially for recreational and recreational purposes, and it is even legalized in some places under certain conditions.

It is a substance whose initial effects are slightly stimulating and euphoric, to go on to induce states of physical and mental relaxation.

It causes a decrease in the level of tension and pain, increases the sensation of hunger and reduces and slows down motor movement. It is also effective as an antiemetic and anticonvulsant.

The effects of this product are well known when it comes to the short term. However, there is more discussion regarding the long-term effects of marijuana, with often conflicting results depending on the type of study that has been conducted.

Despite this, evidence today suggests that its regular use causes brain health to wear out more than it should over time.

Just as Canada is about to become the second country in the world to legalize marijuana use, a study comes to light with findings worth checking out: Teens who use cannabis are causing lasting damage to their brain development, publishes the Montevideo portal.

The new research, done at the University of Montreal, found that the impact of marijuana on thinking skills, memory and behavior during adolescence was worse than that of alcohol use.

Based on the knowledge that drinking alcohol and using drugs, such as cannabis, at an early age affects cognitive abilities, 3,800 adolescents from 31 Canadian schools were followed for four years.

Upon analysis, the researchers found that these problems increased as cannabis use increased and that the effects were long-lasting, unlike those of alcohol.

Each participant provided data on their drug use habits and their brain abilities were evaluated through cognitive tests. Thus they determined negative effects on working memory, reasoning and their ability to control their behavior.

The lead author of this research, Patricia J. Conrod, a professor in the university’s department of Psychiatry, admitted that she expected alcohol to have a greater negative impact on the brains of adolescents.

However, results published in the American Journal of Psychiatry indicated the opposite: Since their brains are still developing, cannabis interferes.

As of October 17, Canada will become the second country to legalize the recreational use of marijuana (the first was Uruguay), the production and marketing of the drug will also be legal. For the study authors, it is especially important to continue with prevention programs.

This is not the only Canadian study that has explored the impact of cannabis use in adolescents. In April this year, other research from the University of Montreal found that the earlier you start using the drug, the more risks of learning disabilities and problems solving problems.

The relationship between brain damage and age is due to the fact that at 14 this organ is still in full development, while at 17 it is less vulnerable.

The evidence from this study also indicated that if you start smoking marijuana in early adolescence, the risk of developing addiction at age 28 is 68 percent, but if use is delayed until age 16 or 17, that risk it drops to 44 percent.

Before, in 2016, the National Institute on Drug Abuse of the United States (Nida, for its acronym in English) warned about the damage that cannabis causes in the mental health and cognitive capacities of adolescents, based on research that it was published in Jama Psychiatry.

That study showed that there is a neuropsychological decline that worsens the earlier the age at which consumption begins, that the damage can be long-term and possibly permanent in the brain.

The Nida has also released other related evidence, such as that the frequent and inveterate use of marijuana from adolescence is related to the decrease of the IQ during adulthood.

Long-term cannabis use can damage the brain

Recently, scientists from the University of Lisbon in Portugal and the University of Lancaster (UK) have conducted a study on the long-term use of cannabis and its possible dangers. The findings, published in the Journal of Neurochemistry, indicate that there is a significant danger: Regular cannabis use could damage memory.

The researchers focused on a cannabinoid-like compound called WIN 55,212-2 and looked at its effects in the brain. Taking mice as experimental subjects, the researchers found that, after continued exposure to this substance, the rodents showed “significant memory impairment.”

At this point. Let’s make a clarification before continuing. Cannabinoids are all those chemical substances, regardless of their origin or structure, that bind to cannabinoid receptors in the body and brain, and that have effects similar to those produced by the cannabis sativa plant (weed or marijuana). 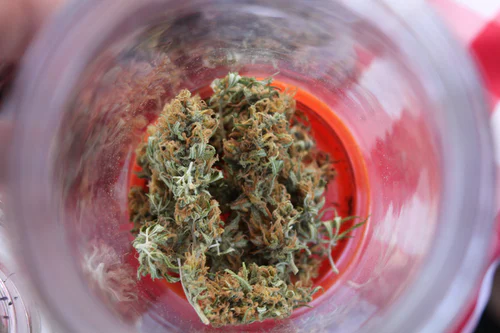 Although cannabis, especially in its form of marijuana, is a widely known substance, studies regarding its effects have always been surrounded by great controversy.

A large amount of research has been carried out in this regard, in some cases with unclear results, on the results of its consumption. However, different studies have shown that its consumption can cause long-term effects on the brain and behavior.

It is important to bear in mind that we are talking about cases in which consumption is carried out frequently over time.

The effects in question depend on the age and the moment of neurodevelopment in which the consumption begins, as well as the time during which this consumption has taken place.

1. Reduction of the orbitofrontal cortex

One of the results that the research has reflected is that the continued use of marijuana causes an evident reduction of the gray matter, especially in the orbitofrontal cortex. This also means less long-term ability to perform tasks that depend on this area, such as impulse control or planning.

Despite the above, many habitual users of this substance show apparently normal behavior after many years using marijuana.

The reason for this is that according to other studies, despite the reduction of gray matter in the brain, the connectivity between the remaining neurons is increased, so that this loss is somewhat compensated.

That is, although under normal conditions an increase in neuron connectivity would be good news, in this case it is the result of many neurons dying, causing those that remain to “work” more; it is a brain mechanism to try to make up for the loss of thickness of the cortex. Furthermore, this increase in connections is less and less as consumption time increases.

Different studies carried out show that the habitual consumption of cannabis can eventually produce a decrease in the intellectual capacity of the subjects, having a lower performance and results in different tests than in comparison with a non-consumer individual.

However, in this type of cognitive competences many contradictory results have been found, which means that this phenomenon may not be significant.

What there is solid evidence for is that marijuana use causes long-term problems in various types of memory. For example, these alterations result in a greater difficulty in transferring the contents of short-term memory to long-term memory.

It is important to note that these effects are especially noticeable in people who consume throughout their development process, that is, adolescents, due to the structural modification of the brain that cannabis use may entail. In adults already formed who begin to consume this decrease is less.

4. Does it promote hippocampal neurogenesis?

One of the most widely reported positive effects of cannabis is the ability to promote the formation of new neurons in the hippocampus, a region of the brain involved in memory processing.

In fact, one of the medicinal applications of cannabis takes advantage of this factor and the fact that it reduces the formation of betaamyloid protein in order to help fight certain disorders that cause progressive degeneration of the hippocampus.

However, this has recently been seen to occur in laboratory rats used for experiments, but not in humans: in our case, the birth of new hippocampal neurons is practically non-existent in adults.

5. It can produce psychotic breakouts

Although it does not occur in all cases, some variants of cannabis can facilitate the appearance of psychotic outbreaks in people with a genetic predisposition to them, especially when consumption begins in adolescence.

This is due to the fact that early consumption hinders the correct neuronal maturation of the connection between the prefrontal and the limbic system, which facilitates the appearance of hallucinations and makes control and behavioral inhibition difficult. In some cases it can potentiate the expression of schizophrenia.

Another of the effects observed and directly linked to the reduction of gray matter in the frontal cortex is the decrease in impulse control.

The ability to inhibit behavior is linked to specific parts of this lobe, which is responsible for counteracting the power of the limbic system, related to emotions and the appearance of desires.

The reality is that we should not take drug use as a joke, even if we talk about a drug with the tradition of marijuana. Such use has increased mental illness in young people, a particularly worrying fact if we take into account that it increases the probability that the user will have a psychotic outbreak.

In addition, the increase in entities such as the crisis of anguish and panic, is related to their habitual consumption.

In this article we answered the question ‘’Does weed permanently damage your brain?’’ We analyzed the short and long-term effects of marijuana use on the brain.