Creativity, a construct defined as the ability of people to produce new, original and innovative ideas according to their context. Undoubtedly, this ability requires the interaction of our skills and processes. Similarly, it is important that the environment is stimulating to develop it.

Therefore, creativity should not be linked exclusively to the artistic, but also as an integral element in the different daily environments.

Today we will talk about the role of the brain in creativity, where does creativity reside in the brain? Join us to discover it.

Creativity is found in the frontal cortex of the brain.

The word creativity is evoked in very different contexts, even in those that may seem less creative. In general, we think of it as simply performing unusual or unconventional acts. Although these are undoubtedly a sign of originality, they cannot necessarily be classified as creative acts in the strict sense.

Creativity can be defined as the set of mental processes that lead to the discovery of new problems, for which an unprecedented solution is also found. Although unusual acts can suggest traits of creativity, only if they build solutions, at any level, are they defined as creative.

A gift or a skill?

Just a few decades ago creativity was thought to be an almost supernatural gift, bestowed only on a few. Studies on the brain and intelligence have shown that this is not the case. As with other attributes, the seed of creativity is present in all human beings; but only some decide to cultivate that seed and make it flourish.

During the 1990s, several investigations were carried out in the United States to discover the secrets of creativity. In one of the studies they measured the electrical activity of the brain, in people who were developing intellectual and / or creative processes. 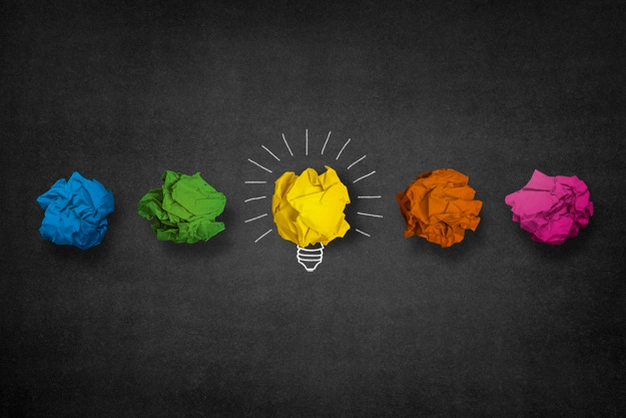 Where does people’s creativity reside?

Where does people’s creativity reside? The popular view defends that the right hemisphere of our brain is responsible for it, but scientists from Drexel University, in the United States, have decided to confirm that belief.

While the most analytical and logical people are believed to lean more on the left side of our brain, those more imaginative and creative do so on the right hemisphere.

Neuroscientists, who are quite skeptical of this conception, have argued that there is not enough evidence to support this idea, since a capacity as complex as human creativity must use vast swaths of both hemispheres.

To try to shed some light on this controversy, researchers from Drexel University have decided, through the analysis of brain images, to study the brain activity of jazz guitarists during improvisation.

Their results, published in the scientific journal ‘NeuroImage’, show that creativity is, in fact, driven primarily by the right hemisphere in musicians who are inexperienced at improvisation. However, those musicians with great experience in improvisation depend mainly on their left hemisphere.

This suggests that creativity is a “right brain capacity” when a person is dealing with an unfamiliar situation, but that creativity is based on well-learned routines of the left hemisphere when the individual is experienced in the task.

Right side for new activities

The researchers recorded high-density electroencephalograms (EEGs) of 32 jazz guitarists, with different levels of experience. 192 jazz improvisations (six songs for each participant) were recorded and scored and scored, on creativity and other qualities, by jazz teachers and music experts.

“If creativity is defined in terms of the quality of a product, such as a song or a painting, the left hemisphere plays a key role”

When the researchers reanalyzed the EEGs to statistically control for the artists’ level of experience, a very different pattern emerged in the results. Virtually all the differences in brain activity between highly creative and less creative performances were found in the right hemisphere, mainly in the frontal region.

“If creativity is defined in terms of the quality of a product, such as a song, a fiction, a poem or a painting, then the left hemisphere plays a key role,” John Kounios, professor of psychology and director from the doctoral program in Applied and Cognitive Brain Sciences at Drexel University College of Arts and Sciences, tells Neuroscience News.

“However, if creativity is understood as the ability of a person to deal with novel and unfamiliar situations, as is the case with novice improvisers, then the right hemisphere plays the main role.”

Creativity depends on connections between hemispheres

Creativity does not depend so much on the right hemisphere as on the intensity of connections between the two hemispheres, a study has found. This discovery can be used to predict the probability that a person will be highly creative based simply on analyzing the structure of their brain network.

Creativity has always been thought to depend on the right hemisphere of the brain, but a new study has determined that it actually depends on communication between the two hemispheres.

The term cerebral hemisphere designates each of the two structures that make up the largest part of the brain.

Each of these two structures is called the left hemisphere and the right hemisphere. The functional differences between hemispheres are minimal and only in a few areas have differences in function been found.

The left hemisphere is considered the center of the faculty of expression. It is the motor part capable of recognizing groups of letters forming words, phrases, both in terms of speech, writing, numbering, mathematics and logic, as well as the necessary faculties to transform a set of information into words, gestures and thoughts.

The right hemisphere governs as many specialized functions as the left. But its way of elaborating and processing information is different from that of the left hemisphere.

It is an integrating hemisphere, center of the non-verbal visuospatial faculties, specialized in sensations, feelings, prosody and special abilities such as visual and sound, for example artistic and musical abilities.

A study published now in the journal Bayesian Analysis, reported by Duke University in a statement, looked at the network of brain connections in the brain’s white matter, spanning 68 different brain regions, of healthy young students.

The white matter of the brain is the set of neural fibers that connect the different regions of the brain and plays an important role in intelligence. It is located under the outer gray matter. It is made up of bundles of wires, or axons that connect billions of neurons and carry electrical signals between them.

The scientists used a particular technique of magnetic resonance imaging (MRI) that allows observing the brain of a person live, as well as drawing the paths of the axons. The computers then converted the brain scans into 3D maps of the brain.

Students were asked to provide a maximum of answers to open questions, to make as many geometric designs as possible in five minutes, and to find other uses for ordinary objects.

In addition, participants filled out a questionnaire about their achievements in ten different domains that included visual arts, music, writing, dance, cooking, and science. By combining all this data, the scientists gave each one a specific creative capacity.

Finally, the researchers created algorithms capable of analyzing this information, of identifying the differences between the brain structures of the young people in the experiment, and of integrating creativity levels into this report.

Analyzing the data, they found no statistical differences in connectivity between the hemispheres, or between men and women.

According to the researchers, this discovery can be used to predict the likelihood that a person will be highly creative based simply on the structure of their brain network. “Perhaps by scanning a person’s brain we could tell what they are likely to be good at,” they say.

According to the researchers, this study is part of connectomics. A connectome is a map of the connections between neurons in the brain. The production and study of connectomes is known as connectomics. In this case, it refers to the probability of calculating the creativity of a person through the analysis of the structure of his brain.

The researchers now set out to further this discovery by developing statistical methods to also study brain connections and IQ.

For now, the therapeutic applications of the discovery of creativity are remarkable. By comparing the interconnections between healthy and diseased brains, connectonics could help better understand dementia, epilepsy, schizophrenia, and other neurological circumstances, such as head trauma or coma.

What causes creativity in the brain?

The creative process has implications for different cognitive functions such as memory, attention, language, and executive functions. That is why one area that is activated is the prefrontal cortex. This is responsible for the activation of the control centers to achieve divergent thinking.

Is creativity good for the brain?

According to Roger Beaty, an expert in cognitive neuroscience at Harvard University, people with greater creative abilities have stronger connections in their neural networks.

How do you activate creativity in the brain?

Clinical neuropsychologist Katie Davis says that creativity is a clear sign of intelligence because being creative requires thinking flexibly and changing thought patterns.

What are the 4 components of creativity?

Creativity is a multiple quality, as it consists of several components. Some of the most relevant are fluidity, flexibility, innovation and originality.