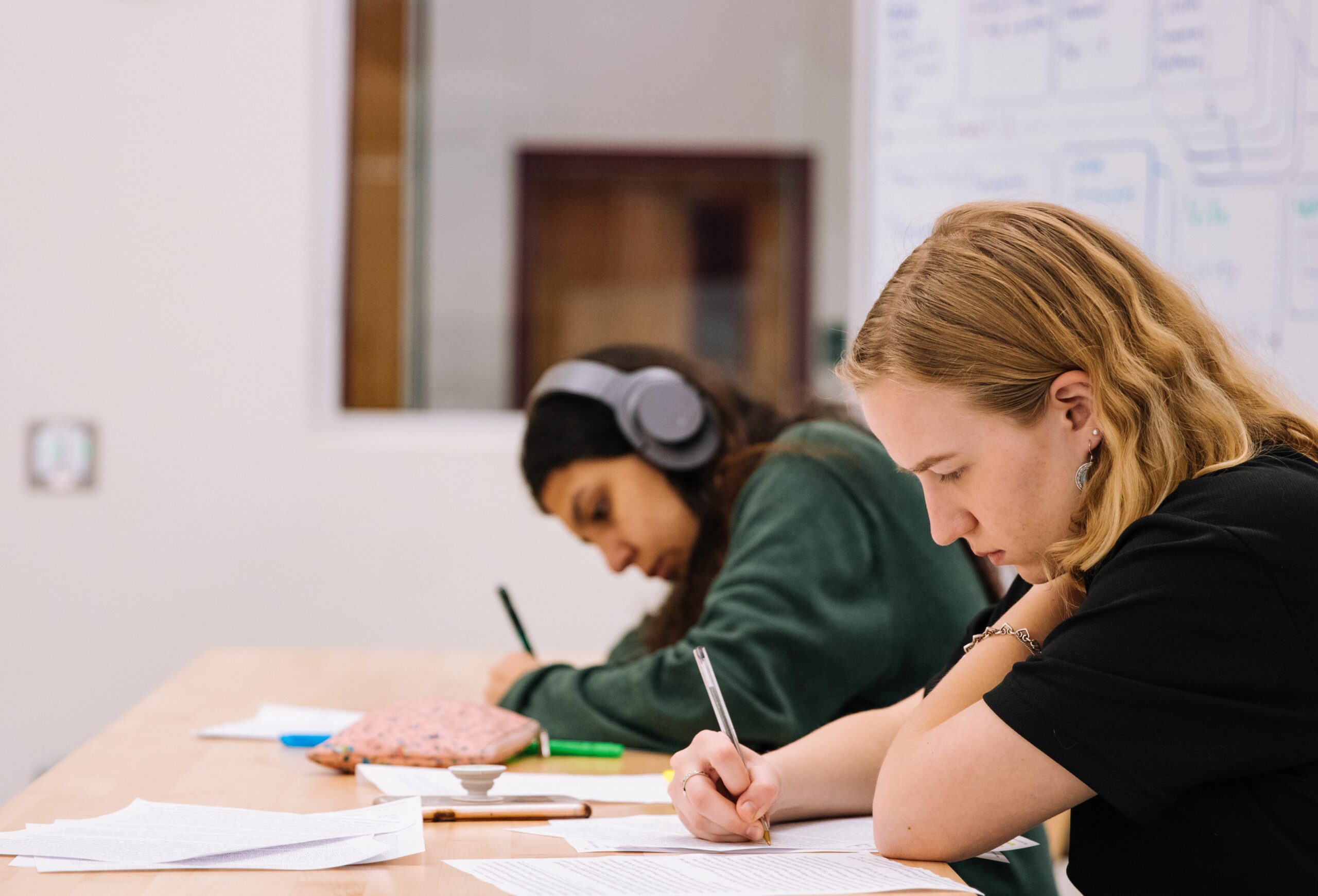 In this brief guide we are going to answer the question “Can all students learn math?” Is mathematics the most difficult topic of study for students or do students really need to be geniuses to learn? Let’s check it out!

Can all students learn math?

Yes, all students can learn math. Race, skin color, and genetics in learning mathematics doesn’t matter. Any student can be a genius.

Mathematics can be the worst nightmare for middle and high school students but, why?  The answer is in mindset.

Family life, education, and self-sabotage are factors that affect the ability to learn this science

The common mentality of math’s professors is that students who memorize well and calculate fast are genius and the rest of students that are slower is because they have a very low IQ cataloging them as ‘’bad students’’.

All humans are different in thinking, strengths, and interests, in mathematic this doesn’t change either, every child has different ways to develop mathematical skills but not all professors know how to teach to every kind of student, the majority of professors emphasize that if you want to be good in mathematic the speed and memorization is essential, but this is not always the answer on the teaching math.

Everybody has heard the phrase by a familiar, or friend, or even by ourselves ‘’I’m bad at mathematics’’.

Experts scientists have commented that negative attitudes towards mathematics are common and detrimental to our learning, this is the big mistake that society has, because once a person adopts a negative mindset immediately, they think they will never understand math producing fear making them not try again.

Mathematics is not an invincible monster. The key to becoming a math genius is overcoming fear and being consistent!

Why do we hate mathematics?

For generations, it has been said that mathematics is only for ”smart ” people. However, the hatred of mathematics does not stem from an intellectual insufficiency, in fact from a feeling of tension and anxiety that interferes with the way students understand numbers and how they solve mathematical problems.

There are approximately 7.594 billion humans on earth and still been limited ways to learn and earn marks at school.

Math is a science where only there is a right or wrong answer pushing students into stress due to social pressure to demonstrate that they are capable of mastering mathematics and demonstrate it knowledge by their grades or on the blackboard in front of their classmates, math learners require lots of memorization for all the rules and equations involved.

It’s normal that students dislike math because they think it’s dull. However, at work and in our personal lives, we use math all the time, this science develops analytical thinking and promotes the ability to think in humans.

Is there a Mathematics’ gen?

A British science team at the University of Cambridge Research Center is in a rigorous search for the mathematical gene. Scientists try to find clues in the DNA of 200 pairs of siblings as to what makes someone a good mathematician.

The ability to do math is commonly thought of as an innate gift that some people are born with. However, a study was done in Norway, in which the skills of 70 children were put to the test, found that all it takes is a lot of practice.

Yes, anxiety in math exists. Mathematic anxiety can be defined as a Lack of student self-confidence in their abilities to learn mathematics and solve problems in this subject. It is not a learning disorder, however, but it can have the same characteristics, in other words, it is the simple fear of doing math

A student with ‘’math anxiety’’ may experience anything from nervousness or discomfort to blockages of the brain’s working memory, which triggers a cycle of poor performance in the subject.

How do I know my child has Math anxiety?

The symptoms of math anxiety are;

Is there a treatment for Math anxiety?

Math anxiety can affect any student in the world. Once a child starts having math anxiety there is no miracle cure for this disease, only prevention is the best way as a treatment for math anxiety.

Prevention begins with math teachers, the impact that a teacher can have in their students is something that they have to focus on; If a math teacher shows to his students that they are qualified and prepared to solve mathematical problems will be cultivating a healthy relationship between his students and mathematics

Math teachers have to consider alternative forms of assessment that can help all kind students gain confidence allowing them to use multiple ways to solve the problem.

Math teachers have to show enthusiasm in teaching their students, emphasizing that everyone makes mistakes in mathematics and providing help and tutoring for his students any moment they need.

If this way of teaching is applied, for sure would be a change at student self-pressure during tests.

How to improve my math skills?

Everybody can succeed in Mathematics, but for this, the first step that must be taken is to leave fear behind, anyone can improve their skills in mathematics as long as they have motivation and perseverance.

Here are some tips:

The origin of this controversial science is not known, the truth is that it’s thought to be even older than writing.

Historians trust that as early as prehistoric times women developed a system to keep track of their menstruation and that men devised another to count the animals in the herds at the time of hunting.

From Babylon and ancient Egypt in the third millennium BC, the first references arise that talk about the use of mathematics, a word that comes from the Greek, and that means “things that are learned.” This science was used at that time to enumerate and count lands, as well as other commercial aspects, for which it was necessary to create its own numerical systems.

Egyptian books written in 1800 BC approximately, are already in charge of showing a decimal numbering system with different symbols, quite similar to that used by the Romans. They also used the addition of fractions to solve elementary arithmetic and algebraic problems.

However, it wasn’t until the time of Ancient Greece that the first mathematician was met: Pythagoras of Samo. This philosopher who created the Pythagorean school in which metaphysics and numbers were the main cause of studies, created different doctrines that are wanted by many and that is still used today.

However, many historians claim that their mathematics is highly influenced by Egyptian systems. In the Middle Ages mathematics was already used in a large part of Europe among merchants and students of science.

Little by little, many mathematicians brought discoveries to mathematics, a science that is present today, in everyone’s life.

Leibniz and Napier in the year 1646, Gottfried Wilhelm Leibniz, a German mathematician, and philosopher, came into the world known for having been the inventor of integral and differential calculus, independently of Isaac Newton. John Napier, for his part, was a Scottish mathematician who invented the decimal point and logarithms.

Benoît Mandelbrot and fractals On November 20, 1924, Benoît Mandelbrot was born, a mathematician well known for his work with fractals. He’s the main responsible for the importance of this domain within mathematics since the beginning of the 80s.

He knew how to use the computer to create the best-known examples of fractal geometry discovered by Gaston Julia and to develop later by Mandelbrot.

Yes, learning math teaches us to think logically and to develop problem-solving and decision-making skills.

Thanks to math, we can also have greater clarity of ideas and use of language. With mathematics, we acquire life skills and it’s difficult to think of any area that has nothing to do with them. Everything around us has a bit of this science.

FAQSs: Can all students learn math?

Is math anxiety a disorder?

No, math anxiety is not a disorder, math anxiety is an emotional issue involving self-doubt and worry of making mistakes. The correct term as a result of brain disorder with severe difficulty in making arithmetical calculations is Dyscalculia.

What subjects do students struggle with the most?

According to statistics in 2016, the most difficult subject for students is math. Students during middle school are consistently struggling against math classes, they consider math is more difficult than other subjects.

Is math skill or a talent?

Is a difficult answer to respond to, however, new scientific studies have shown that being good at math is not a natural ability, just practicing somebody can become an expert in math.

There’s not just one ‘’father’’ in mathematics. Every mathematician has a role of mother and father. Nevertheless, each of them is a parent on a determinate swath in math.

Zero was born in India but was baptized in Europe. It was the Italian mathematician Fibonacci who popularized in the West the decimal system born in India and who began to use the word zero to designate the symbol of nothing.

In this brief guide we answered the question “Can all students learn math?’’ And discovered how children can be successful at it.